The World Gold Council is the market development organisation for the gold industry. With our unique insight into the global gold market, we see unrealised potential for gold across society and intervene to create new possibilities.

The Pros & Cons
of Titanium Rings

Titanium was first discovered at the end of the 18th century. The name was derived from the Titans of Greek mythology, known for their extreme and superior strength.

Invest in Precious Metals
with Silver.com

We take great pride in offering a wide selection of precious metals products at market-leading prices. That, along with our sincere commitment to quick shipping and fast, friendly customer service, keeps investors coming back to Silver.com time and time again.

Gold, silver, platinum, palladium and titanium are precious metals. They are rare metallic chemical elements of high economic value and they are shiny, hard and strong with high melting points. They form alloys are mixtures with other metals and this makes them ideal for jewelry (read the article - Jewelry Creation). 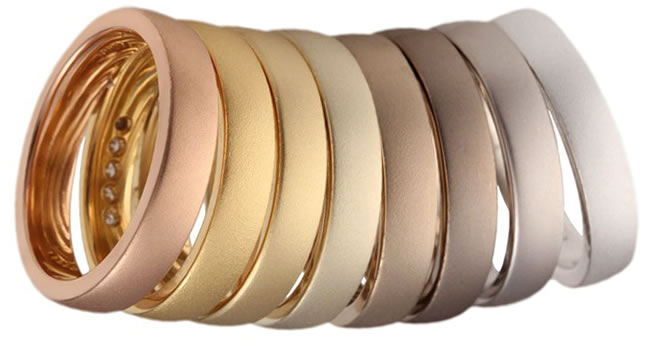 Gold - gold is a highly sought after rare metallic element. For many centuries gold was used for many and symbolizes wealth and prosperity. It is measured by weight and by grams. When it is alloyed with other metals the term carat or karat in the U.S. is used to indicate the amount of gold present. Pure gold is 24 of 24 and is called 24 karat gold. Gold that is 18 karat is 18 of 24 and six of 24 other metals. Its chemical symbol is Au.

Silver - silver was once thought to be more precious than gold. It is a very soft metal and is often mixed with an alloy like copper. Sterling silver originated in eastern Germany where they minted coins of 925% silver. Silver has been used to make jewelry for many thousands of years. Silver tarnishes after exposure to air and the best way to deal with this is to use a silver dip or wipe within impregnated cloth. The symbol for silver is Ag.

Platinum - platinum is more precious than gold and is a very strong dense metal that never corrodes. In its pure form it is harder than gold and for jewelry it is alloyed with 5% of other metals usually iridium. Platinum exists in high abundance on the moon. Its symbol is PT.

Palladium - Palladium was discovered in 1803. It is still white in color except in powder form where it is black. It resists tarnishing an air and is mostly used for catalytic converters in the automobile industry but is also used in dentistry. It can develop a hazy patina over time. Palladium becomes brittle with heating and cooling. Its symbol is Pd.

Titanium - titanium is not a rare element and accounts for 0.6% of the Earth's crust. Titanium comes from the Greek mythology and is known for its superior strength. It is a silvery white nonferrous metal with the highest strength to weight ratio of any known element. Most of the space shuttles are made of titanium. It does react to salt and water and sunlight or body chemistry.

Assay - an assay is a test of the purity of an alloy. A tiny area of metal is scraped from the piece of jewelry and the percentage of gold and silver is determined (see more about Assay).

Hallmark - these are authorized stamp impressions that indicate the maker and the standard of fineness regarding that jewelry (see more about Hallmark).

Types of Finishes - there are many types of finishes including sandblasted, satin, rhodium plated, gilding, hard gold plating, silver plating and diamond cutting. Plating is a process that coats the metal usually with bright colored plating changing the original appearance. Gilding and rhodium plating are the two most common types of finishes carried out in the jewelry industry.

Rolled Gold - is a very thin sheet of gold that is laminated to a lesser metal. The two layers of metal are heated and they fused together.

Enameling - there are two types of enameling. Hard and cold. Hard enameling is a fusion of a special powder glass to metal. Cold enameling refers to enamel paint but he usually doesn't have the durability of hard enamel.

Metal Allergies - if wearing certain jewelry causes localized areas of skin to become itchy this can indicate an allergic reaction to the metal in the jewelry. Nickel is the most common culprit. The term hypoallergenic was made up in the 1950s as part of an advertising campaign to indicate that the metal used has a diminished potential for causing an allergic reaction.

Tarnishing - some but not all metals tarnish. Silver reacts with oxygen and forms a brownish to black tarnish film which is the most common (see more about Tarnishing).