The Great Gold Robbery took place on the night of 15 May 1855, when three London firms each sent a box of gold bars and coins from London Bridge station for Paris via the South Eastern Railway.

A Florida man orchestrated the heist of gold bars worth millions of dollars from a tractor trailer headed to Massachusetts last year by hatching an elaborate plan to force the crew to pull over in North Carolina, authorities said in court papers.

Theft of Bucket of Gold Flakes 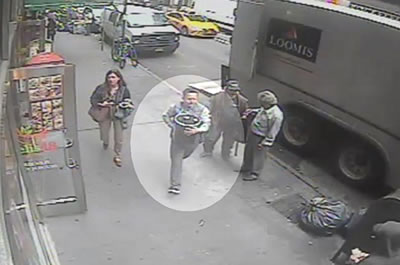 New York Police department's Detective Martin Pastor vowed back in December of 2016 that he would not rest until he caught the chief suspect of the 1.6 million dollar gold flake bucket robbery. Well, as of this past thursday, Pastor has caught his target. No matter how far Julio Nivelo ran, Pastor was never too far off of his tail. Just as suspected by the authorities, Nivelo ran immediately after committing the gold bucket theft from New York, down South to Florida, then West to Los Angeles and finally finished his flee in Ecuador.

Although Detective Pastor could not be reached for a direct comment, we do know that Nivelo was officially caught Thursday night in Ecuador for unknown charges. Nivelo otherwise known as David Vargas (among many other aliases) was currently awaiting extradition from Ecuador into the Unites States.

The gold flakes bucket theft gained nationwide attention for the act's sheer boldness. Nivelo had the audacity to steal the bucket full of gold flakes off of the back of a Manhattan armored truck on September 29th. The fifty year old man had enough obstinacy to waddle over half a mile with an eighty six pound bucket filled to the brim of gold flakes. There is even video footage documenting Nivelo's trek. The video reveals him pausing several times due to the bucket's massive weight, in total it weighed almost as much as Nivelo himself.

Gold flake buckets are produced from jewelers' gold shed. As goldsmiths craft jewelry pieces from sheer gold it sheds and flakes. These gold scraps are later collected, precisely weighed, and kept in storage buckets. At the time of the robbery Nivelo was living in New Jersey close to the West New York area near 48th street and Fifth Avenue where the robbery took place putting Julio Nivelo in the right place at the wrong time. However, it seems that this is not Nivelo's first committed crime as he was not only previously deported four times but also arrested over seven times. Some people just never learn.